A drunk “tank driver” was arrested in a small town in Poland for driving Soviet-era T-55 war tank through the city. The intoxicated “tanker” was stopped and the tank was impounded. – According to the  local news website

On Thursday, June 13, around 9:40 pm, the duty officer of the Police Headquarters in Pajęczno received a very unusual report, from which it appeared that on one of the main streets of the city a moving tank was spotted. Immediately a police patrol was directed to the area of ​​Mickiewicza Street.

The officers found a T-55 tank parked on the roadway and a man standing next to him. Preliminary findings showed that he had ridden this tank as a passenger a moment earlier. Soon the police officers also located another man near the vehicle, a 49-year-old tank owner, the man was drunk.

The T-55 war tank spent almost all night on the street, only about five o’clock in the morning they managed to load the vehicle on the tow truck. In removing the machine from the street officers got help from a former soldier who knew how to drive such vehicles.

Detained “tank driver” was sobering in police custody. For driving in a state of intoxication, a man faces a penalty of up to 2 years imprisonment, while for bringing a direct danger of a catastrophe in the land, water or air traffic, a penalty of up to 8 years in prison may be imposed. 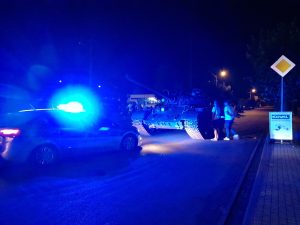 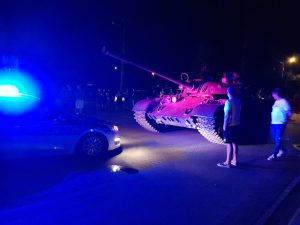 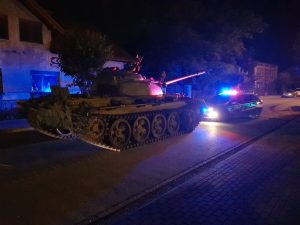