DEC 22, 2021 — Colorado DA has filed a motion to request a review of 110 years prison sentence handed to a truck driver involved in deadly accident on I-70 in 2019 that killed 4 people.

“The DA has filed a motion to request a review for sentencing in this case, and it’s set for Monday December 27th. Polis has also received the application for clemency and it is being reviewed by his legal team. Polis’ office stated they will make an announcement when they have a decision. If you’d like to show support for Rogel, and a change in these mandatory sentencing laws, today Wednesday December 22nd @ 10:30am there will be a PEACEFUL rally at the Colorado State Capital building! If you go, please keep in mind the reason you are there, as well as the feelings and emotions of EVERYONE directly involved”. – According to the latest post on change.org  by Heather Gilbee 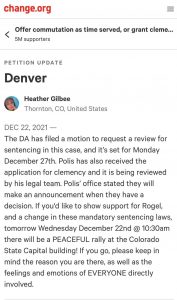 Celebrity Kim Kardashian also expressed her concern about the case

“Celebrity and criminal justice reform activist Kim Kardashian has joined the public outcry over a 110-year sentence handed down to a truck driver convicted in a deadly 2019 Colorado crash.

I pray that Governor Polis, who has been a leader on supporting reforms that increase human dignity in the legal system, will commute his sentence.

This comes four days after a prosecutor who helped secure the conviction asked the judge to reconsider the sentence. Alexis King, a Jefferson County, Colorado, deputy district attorney, filed a motion Friday for the court to set a hearing.

The motion states, “As Colorado law required the imposition of the sentence in this case, the law also permits the court to reconsider its sentence in an exceptional case involving unusual and extenuating circumstances.”

The filing comes as more than 4.5 million people have signed a Change.org petition urging Governor Polis to grant clemency to Aguilera-Medero”- According to the article from freightwaves.com