Colorado Governor  Jared Polis to reduce the prison sentence from 110 to 10 years for Rogel Aguilera-Mederos, a truck driver responsible for a fatal crash in 2019 that caused 4 lives.

“A petition on change.org for Aguilera-Mederos urges that his sentence be lowered, commuted for time served or that he be granted clemency.

“I am writing to inform you that I am granting your application for a commutation,” Polis wrote. “After learning about the highly atypical and unjust sentence in your case, I am commuting your sentence to 10 years and granting you parole eligibility on December 30, 2026.”

Authorities at the time of sentencing said the term was the mandatory minimum set by law, but a prosecutor has already filed a motion for the sentence to be reconsidered.”. – According to the article in abc13 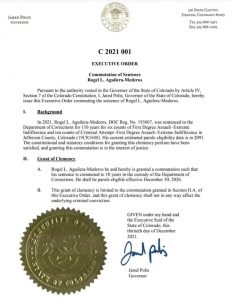