Home > News > Teamsters oppose under-21 CDL pilot proposal, most truckers also say “NO”
Published by iTrucker at 21 May
0

“The International Brotherhood of Teamsters union has joined the majority of early commenters rejecting a proposed pilot program to lower the restriction for an interstate commercial driver’s license (CDL) from 21 to 18”.- According to article in  freightwaves.com and its author John Gallagher

Gallager also wrote – “Roughly 75 percent of the 180 comments filed so far – just days after Federal Motor Carrier Safety Administration (FMCSA) announced the proposal on May 14 – have come out against the initiative, mostly for safety reasons. The Teamsters agree”.

Yesterday iTrucker.com conducted its own poll on the subject among iTrucker Facebook page followers and members of their Facebook group Truckers of Past, Present and Future . 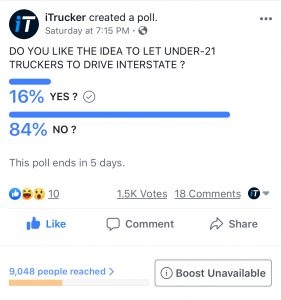