Trucking hires continue to stall as job growth cools down

Trucking hires continue to stall as job growth cools down

“Job growth fell well short of expectations in May as the economy added just 75,000 workers to payrolls during the month. Within the transportation and logistics sector, job growth also struggled as trucking hires continue to stall in the 2nd quarter.” – According to article in http://freightwaves.com and its author Ibrahiim Bayaan

Bayaan also wrote – “The Bureau of Labor Statistics (BLS) reported that the economy added 75,000 workers to payrolls in May. This fell short of consensus estimates of a 180,000 job gain and is a marked slowdown from the strong pace of hiring in the previous month. In addition, results from both April and March were revised down by a combined 75,000 jobs, indicating that trends in hiring have not been quite as strong as previously thought.” 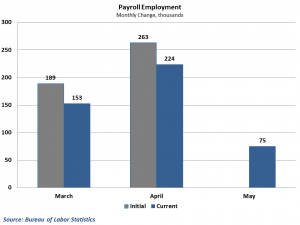